Co-designing Weavly at the Beverley school

From March 24th to May 2nd, 2022, a series of co-design sessions were held at an elementary school in the Greater Toronto Area that specializes in working with students with intellectual and physical disabilities. 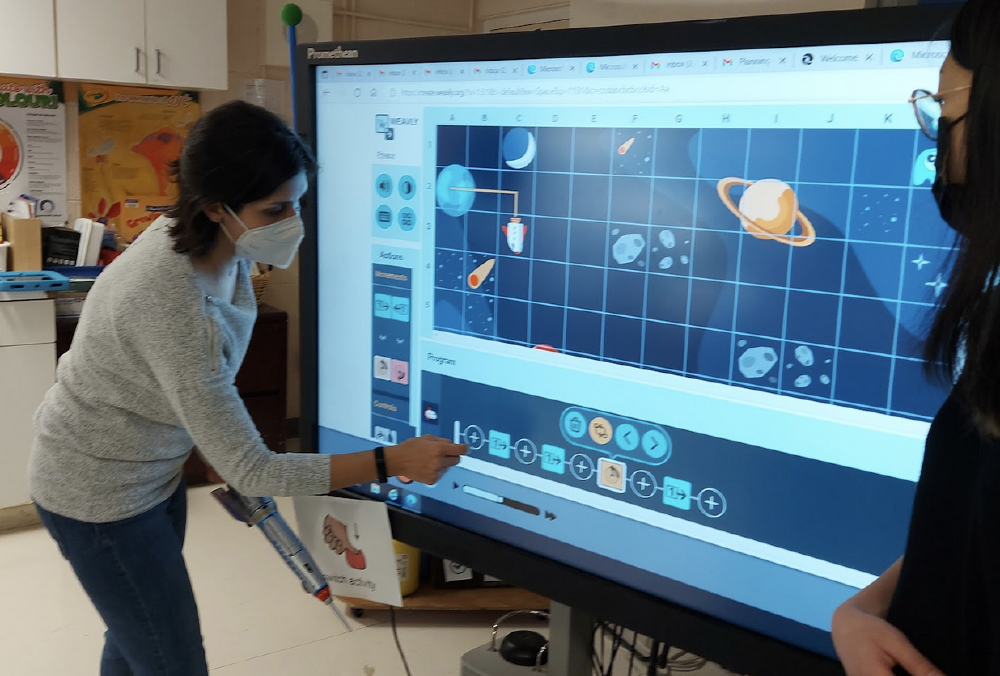 In the first session, four classes with students in different age groups participated in learning basic directions and trialing Weavly. In the subsequent sessions, only the Intermediate Level class was involved and continued learning concepts and exploring Weavly.

The participating students ranged from ages four years old to teens. Our student co-designers had diverse needs, with a mixture of developmental and physical needs.

During the first session, students with their teachers and support team worked with IDRC facilitators from the C2LC/Weavly team to complete the co-design activities. For the subsequent sessions, only the Intermediate Level class with ASD continued to be involved, along with teachers, the support team, and IDRC facilitators.

Students were then introduced to the movements “turn left” and “turn right.” In addition, facilitators also used the movement cards taped onto large colour-corresponding building blocks to reinforce concepts. With the blocks, students were able to have a tangible object to associate with the directions and colour. They were also able to use their fine motor skills to hold and select a block as a response to an instruction or activity. 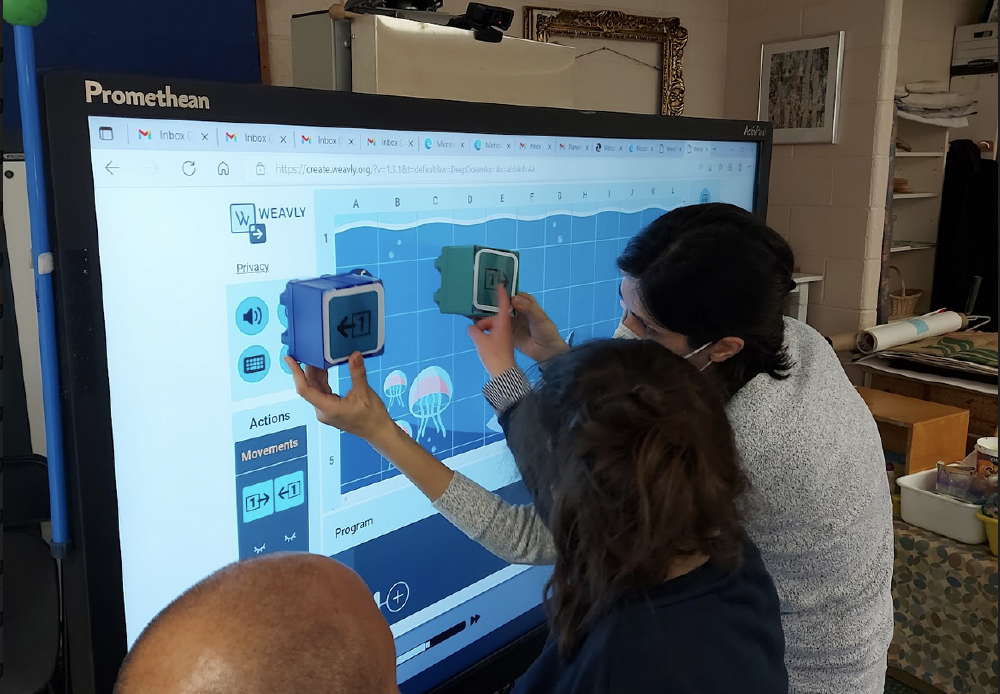 In the final session, students were introduced to three types of lines – horizontal, vertical, and diagonal – specifically to teach the concept of moving diagonally to reach a target. This was facilitated through an educational video on types of lines, drawing the three types of lines on paper, completing a mission to help a lost dog return home by using tape to create connection lines, physical demonstration of lines using arms, and using a jumping rope, snake toy, and other classroom materials to demonstrate the lines. Students were able to follow along and be actively engaged in the activities and demonstrations.

During these co-design sessions, facilitators would review concepts with the students that were taught in previous sessions. The use of physical objects and toys throughout the sessions were used to capture attention and interest for activities.

After the concept review at each session, Weavly was projected onto the Promethean board and facilitators used simple language to introduce the coding environment. For the students to trial Weavly, they were challenged with several missions on the different available backgrounds. Students began with creating programs using only “move forward” or “move backward” and gradually worked up to adding “turn left” or “turn right” in the programs. These missions were completed as a class and students took turns choosing steps on the board to move their on-screen character to their destination.

Examples of these missions were:

For some of these Weavly activities, facilitators started the activity with a mission that had been completed in a previous session, in order to produce familiarity and to review concepts. Following this, facilitators introduced the different functions of Weavly and how to use the action blocks.

To capture interest, facilitators used toys or videos related to the mission characters, which helped to set the stage. To encourage focus and reduce visual distraction of the classroom, students were brought closer to the board and the lights were turned off during screen-time. These adjustments allowed everyone to see the sequence being built together and provided support for an engaging experience. Facilitators also engaged in “debugging” by showing students how their selection of movements will play out despite choosing a wrong move or turn to reach their target. These missions provided goal-oriented activities where the students could develop their understanding of basic directions.

After a co-design session of trialing Weavly together as a class, students were provided with the opportunity to use Weavly individually on their iPads or on the touch-screen board, with the assistance of a facilitator, teacher, and/or a support team member. They participated in planning a program and completing one or two goals on a preferred background. The students were able to complete missions on different backgrounds and create designs on the sketchpad, as well as learn about the different functions of Weavly and the types of lines they can create. Several students appeared to enjoy watching the programs run and listening to the music notes it produces. 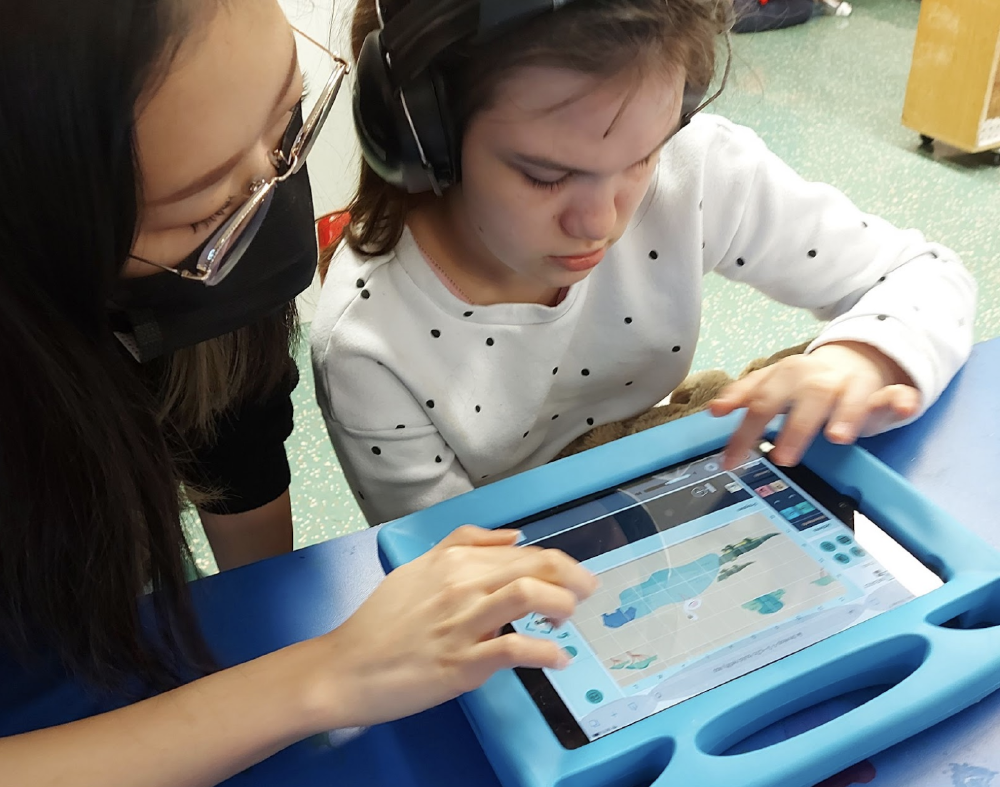 Several technical improvements have been observed and suggested by the Beverley and IDRC team. The following suggestions were identified:

Several facilitation strategies have been observed and suggested by the Beverley and IDRC team. The following suggestions were identified: