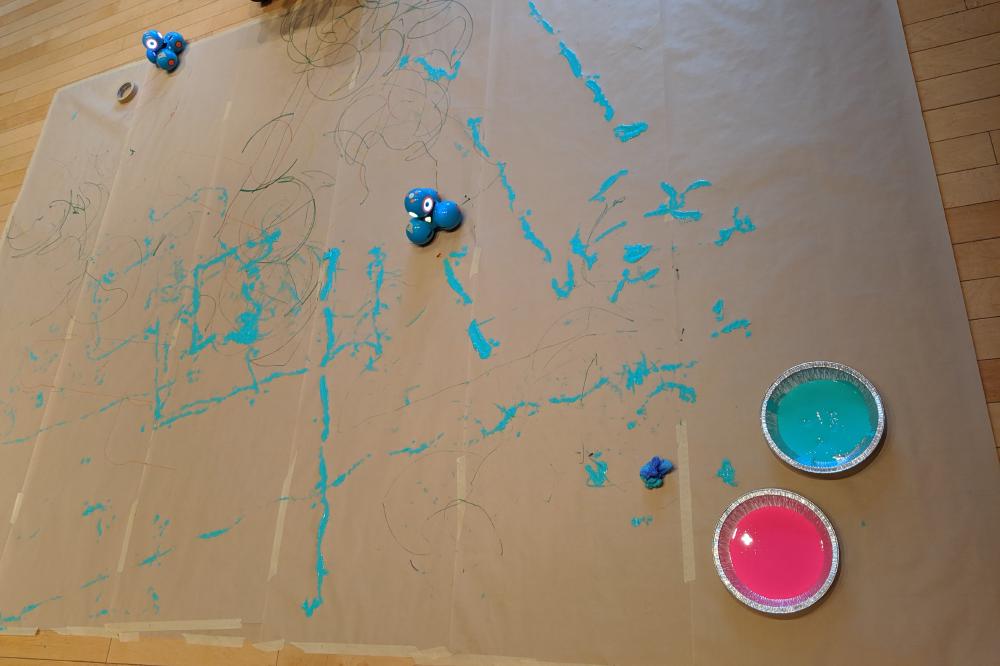 This co-design session was held on July 12th from 9:30-10:30 at Kayla’s Children Center, a centre specialized in educational, therapeutic, and recreational programs for infants, children and teens with special needs, in Thornhill. The event was attended by 4 campers aging between 5-7 years old. Each camper was accompanied by their camp counselor. Half of the participants were using powered wheelchairs and the other half were using manual wheelchairs.They communicated choices offered either auditorily or through single choices provided visually with symbols and accompanied by auditory labels. They indicated their choices using either facial expression or movement of a body part. This event was facilitated by three IDRC members and one member of the Bridges team Canada.

Prior to the co-design session, the team had an opportunity to work with these kids during three coding sessions facilitated by the Bridges team. These initial interactions with the kids helped the team to better understand the individual characteristics of each camper, their physical and technological needs, and their relationships with their counsellors. The campers had a chance to work with Cubetto and Dash and Dot robots and learned about coding concepts, such as categorization, sequences, parameters and repeated patterns. Our learnings from these sessions include:

One-on-One Facilitation: These campers required significant one-on-one support to physically interact with the prototype and robots.

Using Trackpad: For the two campers who controlled their wheelchairs with a joystick, a joystick was brought in for the coding sessions to create codes. However, they reached out to use the trackpad and were able to use it to move and select items.

The C2LC prototype was projected on a screen and the facilitator used simple language to introduce different sections of the prototypes to the campers. 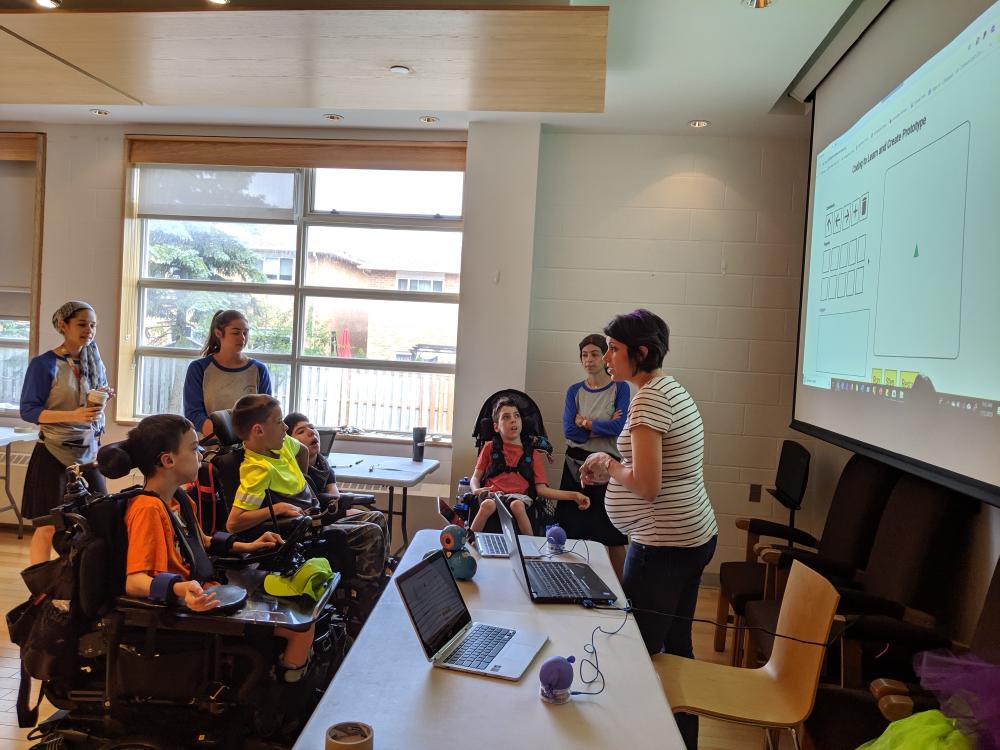 Campers got the opportunity to trial the C2LC prototype with an art activity. Markers were taped to Dash robots and Sphero robots were dipped in paint. Campers in this class had never played with Sphero prior to our co-design session. The campers coded their own sequences that the robots drew or painted on paper laid out in front of them.

Some campers interacted with technology through their counsellors’ support. To build a sequence, counsellors provided each of the three command options with long pauses in between (Move Forward, Turn Right, Turn Left) and waited for a response from the camper through either a facial expression or movement of hands or legs that indicated their “yes”. This made building a sequence take longer than the facilitators had anticipated. In contrast, the campers who had fine motor skills were able to touch their screens and build their sequences at a much faster pace.

The other challenge was positioning the campers, the computers, as well as the artwork during the activity so that everyone could see their work and participate in a collaborative art making process. One of the campers had a reduced field of vision and looked towards a specific direction. When he was taken from his wheelchair and brought to the ground level, he was not able to look down at the panels of paper laid in front of him to observe how the robots were following his sequences. Facilitators positioned the computer in a direction so that he was able to see the sequence he was building on-screen. In the previous coding sessions, the Bridges team projected the activity in progress onto the screen and positioned the camper’s wheelchair close to the screen so that he could look up to the screen and follow the activity. At this session, we did not have access to the required devices to project the activity on the screen. 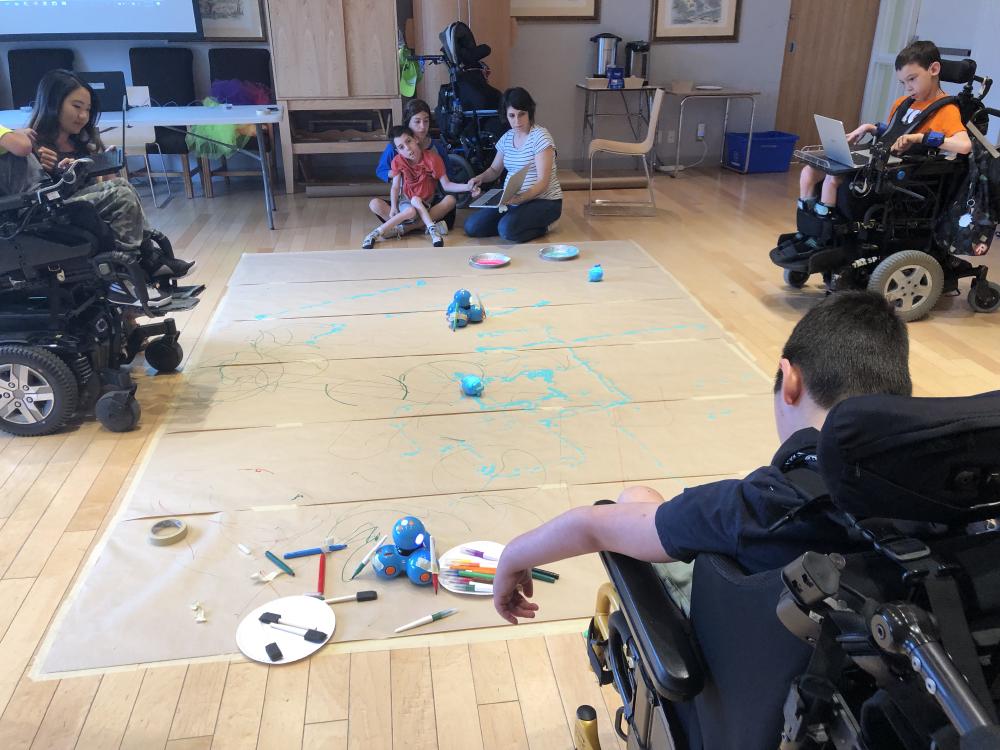 Once campers had an opportunity to trial the prototype with the art activity, they were asked to participate in a design activity and try to redesign the prototype based on their individual preferences and needs.

This part of the session was especially challenging due to how we had structured our activity. The questions included in this part were predominantly open-ended while these campers required a specific set of options to choose from when answering questions. For example, asking a camper about what other features/actions you would add to this prototype was not compatible to their communication abilities and they preferred choosing from a set of options verbally provided to them. Having a set of alternative options printed on cards and presenting them to the campers and asking them whether they liked adding them in or not might have been a more practical and efficient approach for this group of co-designers.

This co-design session required significant sustained attention and proved to be a challenge for one of the campers who opted to take a long break, as a break was not planned for in our co-design session. Once he came back to the activity, he only provided positive responses to all questions avoiding any further discussions. This response might have been due to various reasons, such as being tired, trying to please the design team, trying to finish the activity, not being able to think of any alternative options, not understanding the questions, actually liking the available options, etc.

To sustain interest and encourage engagement in the future, integrating stimulating and engaging components for kids, such as different colors, textures, sound, lights, moving pieces may help. Working on digital screens might provide an engaging experience because participants can directly play with interactive components, and those devices allow adding voice comments, making drawings with their hands, etc. Facilitators should be mindful that one-on-one setting at a design station may be overwhelming for some campers and breaks should always be an option. 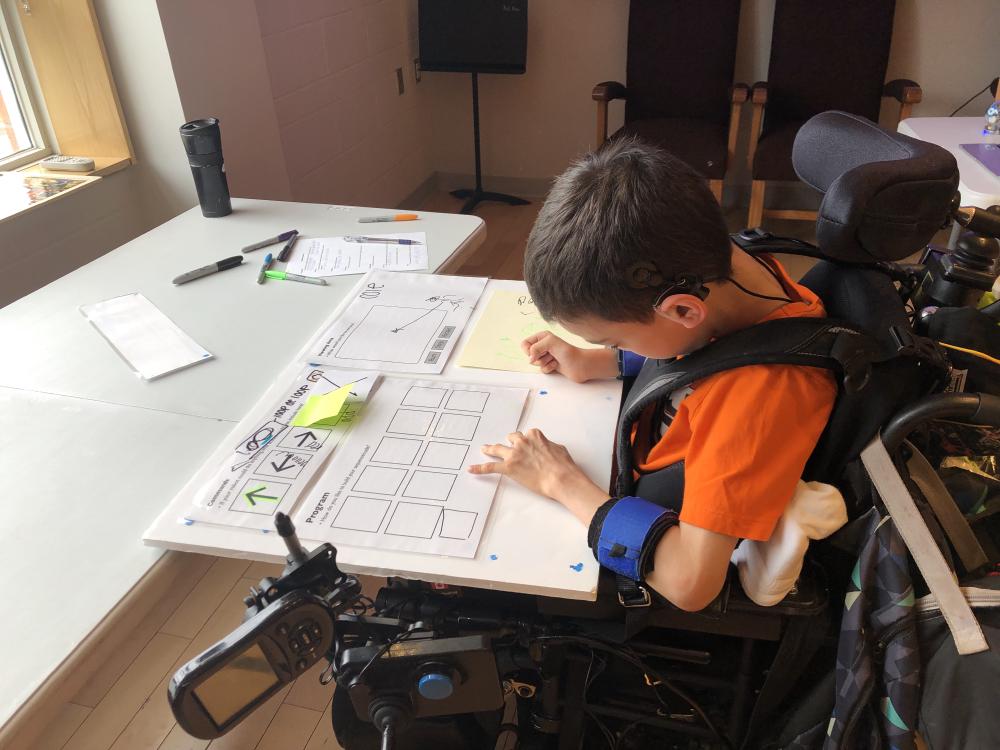