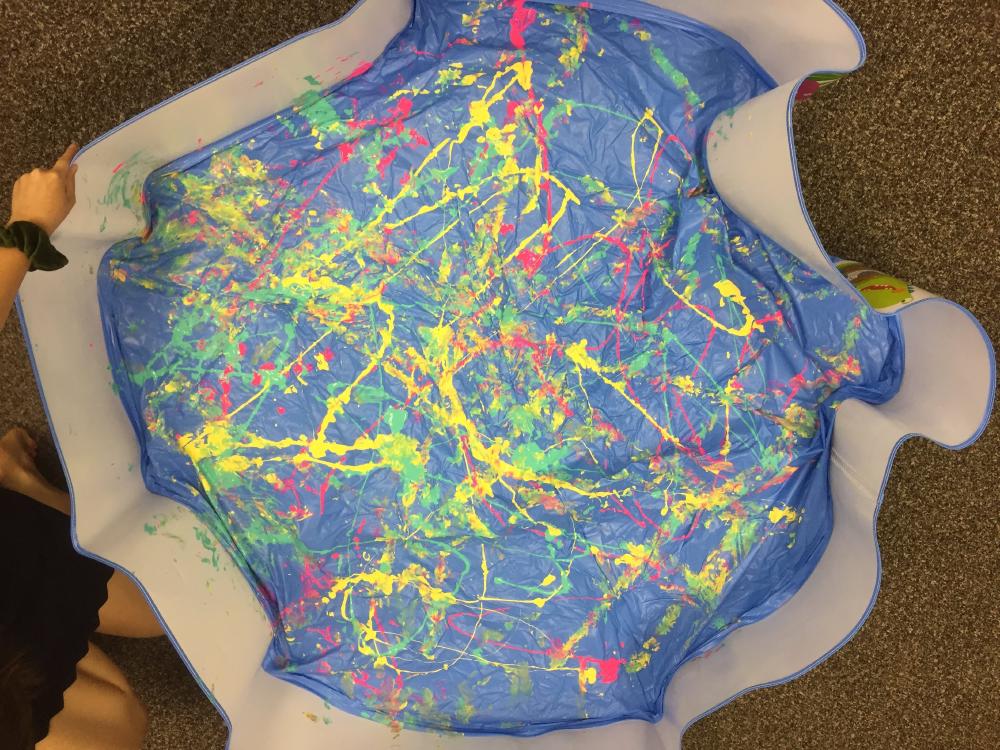 This co-design session was held on July 26th from 9:30 a.m. - 11:30 a.m at Playful Strides, a pediatric therapy clinic specialized in therapeutic and recreational programs for infants and children, in Milton. The event was attended by four campers who were between five to seven years old. Each camper was on the autism spectrum and presented with their own unique social and behavioural differences. The event was facilitated by three IDRC members and two members of the Bridges Canada team. Two of the campers’ parents were also present during the sessions and provided support to their children when needed. Volunteer members at the centre and various specialists, such as an occupational therapist and a speech-language pathologist, were available on site to offer help when needed.

Planning for the Co-Design Session

The team was involved with three coding sessions facilitated by the Bridges team before leading their co-design session. This involvement was important to build rapport with the campers and to understand their individual learning and behavioral needs. During these sessions, the campers had a chance to work with Cubetto, Code and Go Mouse, and Dash robots and experience coding concepts, such as categorization, sequences, and repeated patterns. Our learnings from these sessions include:

Use a Visual Emotional Regulation Chart: Campers were provided with a visual tool to communicate how they are feeling with a zone of regulation chart where they can express themselves by pointing to a zone.

One-on-One Facilitation: These campers required significant one-on-one support to be able to stay focused on tasks and to interact effectively with the prototype and robots.

Do Offline Activities Before Using Digital Interfaces: These campers benefited from creating sequences using paper pieces before interacting with the digital version of the prototype and robots. This was to encourage them to plan their sequences and not just push buttons at random.

Having a Body Break: Campers benefited from a body break (a 15-minute obstacle course at the centre) to break the session into two halves.

The C2LC prototype was projected on a screen and the facilitator used simple language and printed examples to introduce the different commands on the prototype. Campers were then divided into groups of two and each pair used printed prototype commands to build a sequence to move Dash along a zig zag path taped on the ground in front of them. Once they created their offline sequence each camper entered their program into the prototype and ran their codes. At this point some campers tried touching the screen to select commands while others used the trackpad to build their program. 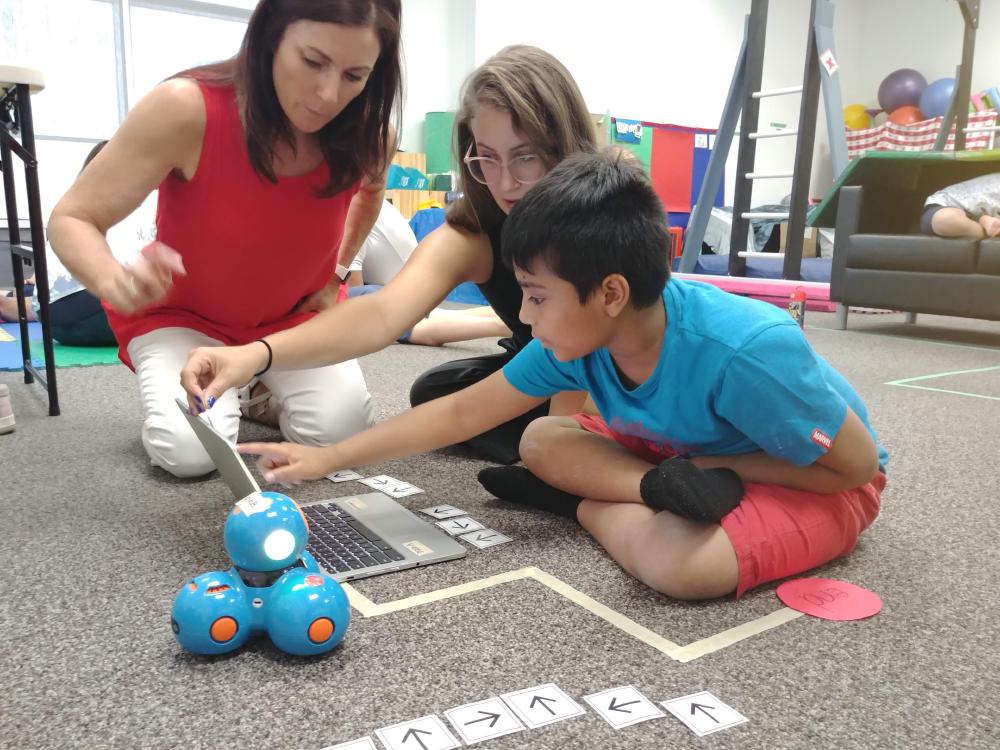 After, the campers got the opportunity to participate in an art activity as they used the prototype to draw with Dash and paint with Sphero. Markers were taped to two Dash robots that moved on panels of paper laid on the floor and Sphero robots were rolled in paint and placed in a kiddie pool. Each camper individually controlled a robot with their own sequences built in the C2LC prototype. Each camper got an opportunity to work with both Sphero and Dash in this activity.

The camp environment had many distractions within a common indoor space: large windows and curtains, various colourful toys and therapy resources, as well as ongoing therapy sessions nearby. Participating in one activity within this camp environment for an extended period of time made focusing difficult for campers, especially since there were a limited number of robots and turn-taking was required. To encourage engagement, campers were reoriented to the activity at present and given regular reminders to look at the robot in front of them as it carried out their programmed sequence/code.

Some of the campers also had difficulty recognizing that the sequence being built on the prototype was providing direction for what was being drawn on the paper or painted in the pool. They required significant facilitation during this activity. After the art activity, campers took a body break.

For this activity, four stations were set up: “Commands”, “Program”, “Viewing Area”, and “Alternative Access”. At each station only one section of the prototype was discussed and several alternative options were provided for idea generation. Campers spent about 10 minutes at each station. Facilitators used a board with all the components of the C2LC prototype attached to it at each station to take each camper through the available options and discuss what they would like to add to the board. 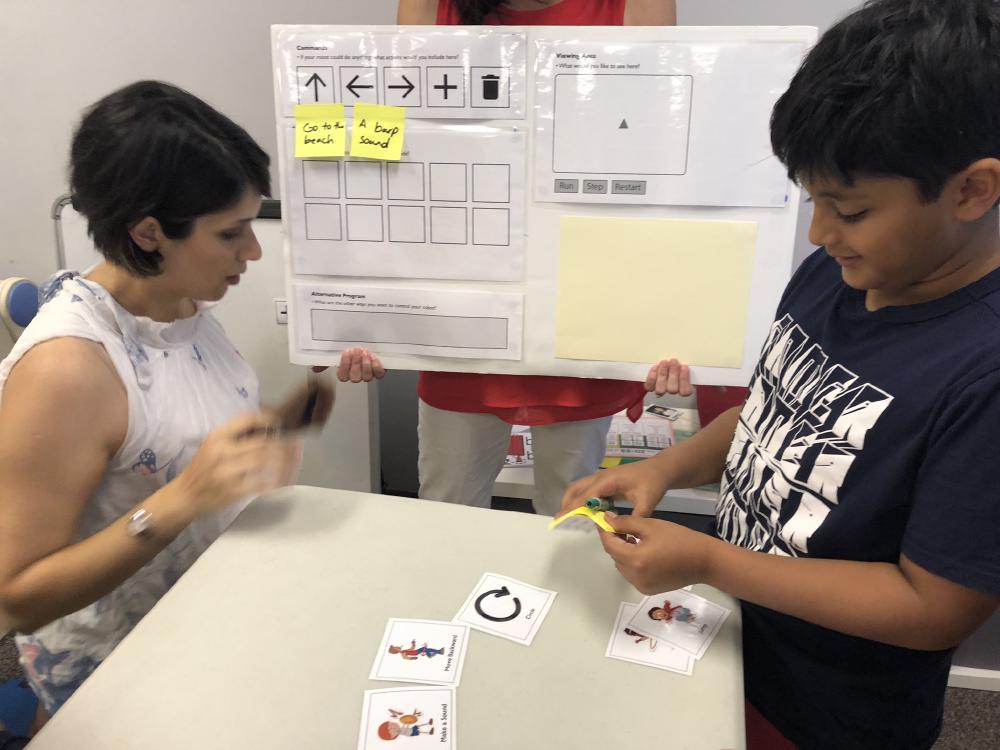 At the “Alternative Access” station, samples of alternative access devices, such as a joystick and a trackball, along with a video of an eye gaze and a sip and puff were physically provided to help demonstrate what alternative access meant. At this station, there were also taped sunglasses and oven mitts available to simulate visual impairment and limited fine motor skills, respectively. Despite providing the examples and videos, empathy was a challenging abstract demand - campers struggled to understand why these devices should be used. Most suggestions were expressed for own personal preferences. 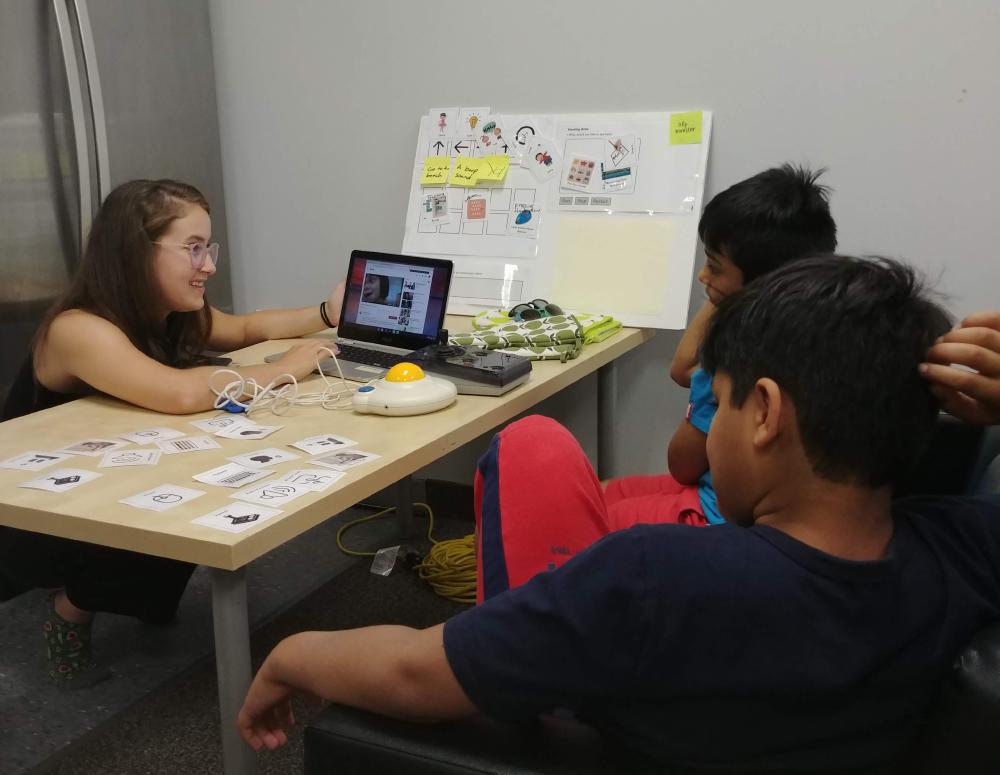 One camper had significant echolalia and was provided with options to communicate his own ideas. When given two options verbally, he would regularly repeat the last option provided as his choice. It was unclear what he prefered from verbal lists of choices.

Overall, this co-design activity seemed to be abstract for this group’s abilities. There were some good discussions at the “Commands” station in regards to new commands and colors, as well as the “Viewing Area” station (adding different backgrounds and icons). However, the campers were less engaged compared to other robot activities and could not contribute meaningful selections at the other two stations. Facilitators were wondering if the ideas they contributed were done to complete the activity and move on to satisfy the facilitator, rather than to redesign the board.